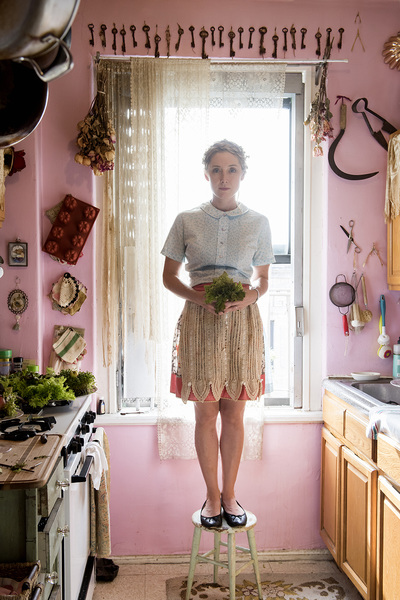 (Image Courtesy of Emily Andrews)
Dana Sherwood is an American artist whose diverse practice explores the relationship between humans and the natural world in order to understand culture and behavior in a changing environment.  In her work, nature, often in the form of non-human animals, plays a complex role as both subject and collaborator, asserting its presence and subverting the artists’ perceived control. Sherwood relies upon her own style of magical-realism to portray contact between human and non-human animals as a tool to understand culture and behavior and more importantly to recognize the interconnectedness of our ecosystem. Her sculptures, videos, and paintings depict ritualized feedings created for animals who live on the frontiers of human civilization such as raccoons, possums, and foxes as well as our for our close companion species like horses and dogs. She experiments over days and nights serving them decadent cakes, sculpted gelatin molds, and raw meats for them to enjoy, capturing their indulgence on film and making paintings of the encounters. The animals assert their presence and desires as the work reflects on the Anthropocene, the current geological epoch in which human activity has caused substantial, irreversible damage to the natural world. The extended culinary conversation results in a body of work that is paradoxically enchanted, supernatural and systematic at the same time.

"My work consists of two practices: the fieldwork where I am waiting, watching, filming and responding to the animals, and the studio where I edit the videos and make drawings and sculptures.  I spend a great deal of my studio time drawing and painting, creating scenes taken directly from the videos, or sometimes scenes I imagined or wished would take place.    I have found that over the years making this work that as much as I have learned about the animals I am watching, these reflections on nature have also affected the way that I approach drawing, painting, art making and life in general.
A consistent theme in my work is control.  Specifically, the control of nature by mankind and our desire to tame it for our own purposes.  But nature is unpredictable and our ingrained tendency to superimpose human traits on non human animals underscores this point.  As Wittgenstein once said, “If a lion could talk we would not understand him.”  My interpretation of this statement is exactly that, all living creatures have their own subjectivities and perceptions of the world that colors the way they view and interact within it. We love nature and we want it to flourish and be accessible in our daily lives, but the moment it starts to encroach on our territory, and subvert our perceived control, we reject it and try to dominate it."
Loading...